As mentioned in a previous blog post in the Autumn 2018, I have veered toward notable experiences with the area’s food trucks instead of comprehensiveness due to the sheer number of food trucks that roam Central Ohio these days. With that said, two of the three trucks featured here are well-established veterans of the scene which my spouse and I have had the chance to visit numerous times, while the other reflects a culinary trend in the local area that I hope is a continuing one. 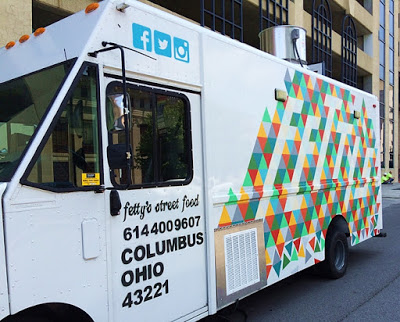 Fetty’s Street Food – my spouse’s niece, who had spent some time studying in South Africa near Durban earlier this decade, mentioned one her favorite dishes she ate there was something called Bunny Chow. Originating with the Indian population of the area, this popular dish involved a nicely spicy curry poured into a hollowed out portion of a bread loaf.

As regular readers of this blog know, my spouse and I are avid pursuers of spicy foods, and this dish sounded right up our alley. When I found out that Fetty’s Street Food, a food truck owned by Cape Town native Damien Ettish which arrived on the scene in 2016, had this dish on their menu, I knew I had to pursue a visit as soon as possible. Being new, the service was a touch slow and the menu was somewhat limited, but their Bunny Chow, whose version included a nice cooling cucumber raita, was quite tasty indeed.

Since that first visit, our opportunities to sample Fetty’s have been limited, but we’ve noticed that not only has the menu expanded (usually the Bunny Chow along with several South Asian- and India-based dishes) but also the food comes out faster, like this tasty Penang Chicken dish I sampled at the Columbus Commons Food Truck Thursdays not too long ago.

Bonus points come in with the opportunity to grab some Boerewors (a traditional South African sausage) for home meals.  Between Fetty’s and the Cape Malay-oriented Hisham’s, Columbus’s street food connection to South Africa is pretty nicely covered.

Ninja Bowl – Sometimes, reliable is what you want. Wraps are not the most sexy items to write about, but Pitabilities is always an option when I\’m looking for a food truck style meal and they’re in the area.  Bowl-style food trucks also fall into that category of solid but not necessarily alluring type fare, and Ninja Bowl stands out a bit ahead of the pack from my encounters.

These Teriyaki-styled bowls don’t come with a lot of customization like some of their counterparts: you get a choice of three proteins (Chicken, Beef or Tofu, or a combo of your choice of two) or an all Veggie Bowl, coated with the requisite sauce and plopped over rice. You also have the option of typically three different sides in Gyoza, Spring Rolls, and Edamame.

Simply, the sauces taste as they should, the meats never seem too dry or chewy, nor are the veggies too soggy from our experience. Sides are also always prepared well.  Even though we’re not super-regular customers, the owner recognizes us when we do drop by and we typically exchange a few friendly words with each other. 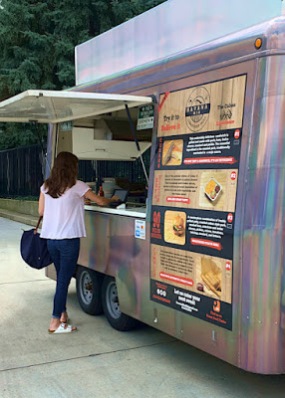 Havana Mia OH – Perhaps it’s not all that surprising that mixed-weather-prone Ohio wouldn’t necessarily be a destination for folks living in the islands around the Gulf of Mexico or the Caribbean.  Consequently, restaurants featuring Cuban, Jamaican, Puerto Rican, and other cuisines of that region are a fairly uncommon sight around the metro.

But over the past year, things have been changing for the better. Brick and mortars like the Caribbean-oriented Taste Bay on Henderson Road, Powell’s Pablo’s Havana Cafe, and Franklinton’s Lou’s Fresh Flavor (Puerto Rican) have joined the fray with veterans like Hilliard’s Starliner Diner and Louie’s Fusion Grill, Downtown’s Plantain Cafe, and Linden-located Ena’s Caribbean and Island Vibes, among others. 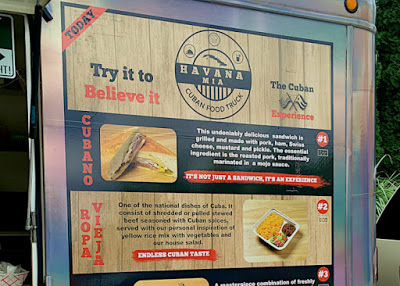 On the food truck side, the Cuban-oriented Havana Mia OH has joined the fray. Here, the item selection is fairly focused, with a Tamale and a 90 Miles Burger (referencing the distance between Cuba and the southern tip of Florida, this burger adds Cuban-style pork to the basic burger combo) joining a traditional Cuban favorite (Rope Vieja) and a domestically developed Cuban-American creation in the Cubano Sandwich.

Similar to Fetty’s Bunny Chow Sandwich, I really have no measuring stick to compare to Havana Mia OH’s rendition.  So I have to go with my Internet research and my taste buds on this one. The sandwich seems to have the right bread – it may not be as toasted as darker brown as some versions I’ve seen online, but the exterior was crispy enough for me.

The included potato sticks are not an uncommon garnish, and add a nice change from something like base model potato chips. Diagonally sliced, the pork inside is tender and the sandwich overall is pretty delicious, It’s not quite as fabulous as the Chivito Sandwich from Caribe Sur, another fairly recent arrival to the local scene with Caribbean oriented eats, but it’s one I’d order again.

But maybe not before I sample the Ropa Vieja, another dish I would like more experience with.